In Luke 2:7 we are told concerning the birth of Jesus, the Messiah… Emmanuel- God with us… And she gave birth to her firstborn son; and she wrapped Him in cloths, and laid Him in a manger, because there was no room for them in the inn.

This is fascinating to me. Have you ever stopped to consider why God allowed His only Son to be born in a lowly manger? Could not an omniscient, loving, all powerful God have arranged a room at the inn? Or even better, could he not arrange for Jesus to be born in a palace with midwives, servants and clean water? Why was the Creator delivered into this world at a farm stable? And why Bethlehem? This was a small village- nothing of significance about this place… or so it would at first appear… so let’s see what the Bible says about those questions.

In Micah 5:2 we are told prophetically: But as for you, Bethlehem Ephrathah, Too little to be among the clans of Judah, From you One will go forth for Me to be ruler in Israel. His goings forth are from long ago, From the days of eternity.” So God told us that Baby Jesus was going to be born in Bethlehem… so God puts it in Caesar Augustus heart to take a census… Having Joseph and Mary travelling from Nazareth in the Galilee to Bethlehem, thus bringing about the fulfillment of Micah 5:2… but why Bethlehem?

Interestingly, Bethlehem’s shepherds were known for caring for the temple flock. These men may well have protected and cared for the lambs used in temple sacrifice.

Theologians and Scholars interpret Micah 4:8 as a prophecy indicating that the Messiah would be revealed from the “tower of the flock” (Migdal Eder) which is connected with the town of Bethlehem, southeast of Jerusalem.

Migdal Eder was a watchtower in Bethlehem built to protect the Temple flocks- we first hear mention of this place in Genesis 35:21- Jacob spent time there.

During lambing season… the sheep were brought there from the fields, as the lower level functioned as the birthing room for sacrificial lambs.

Priestly shepherds “would wrap the newborn lambs in swaddling clothes” and place them in a manger “until they calmed down” to keep them “without defect”, suitable to be sacrificial lambs for the sin of the Israelites…. During the time of the Temple sacrifices.

Bethlehem was special because the shepherds in the fields of Bethlehem raised lambs for the Jewish temple sacrifices in Jerusalem.

So why the manger?

The manger was where the sacrificial lamb would begin its journey. Before Jesus had taken His first breath, God had decided that His life was to be given as a sacrifice to pay the penalty for our sins… and He would begin His journey, just as the lambs began their journey.

God testified to His intent for the permanent forgiveness of sins… and the re-establishment of relationship with humanity… by having Jesus be born in the manner and location of the sacrificial lambs of the temple just as the prophet Micah proclaimed. 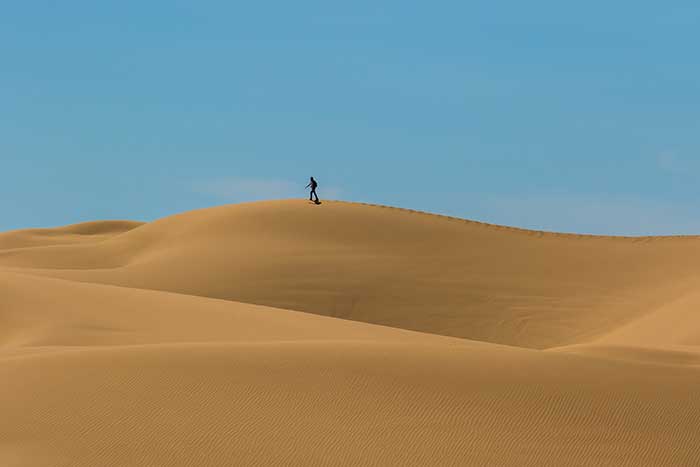 Does your life seem like a walk in the desert? I often feel this way.

The truth is that “the desert experience” is necessary for the Christian life. The desert is where godly character is forged. It is the refining process of God… the breaking of our self-will… the shattering of our ego… the removal of all the “little gods” that we bend our knee and heart to in this world. The desert is where the person that God wants you to be is found.

And I’ve learned though my time in the desert, that anyone wanting to be of any use and service to the Lord must first die in the desert.

As Isaiah the told the people of Judah… in Isaiah 51:3… Indeed, the LORD will comfort Zion; He will comfort all her waste places. And her wilderness He will make like Eden, And her desert like the garden of the LORD; Joy and gladness will be found in her, Thanksgiving and sound of a melody.

When we turn away from all the ungodliness of this world… and trust wholly in our Lord and Savior Jesus… the Holy Spirit will make the desert wilderness of our lives into a garden of the LORD.

So royal saint of the Lord Most High… you are in the desert for a reason… God is refining you… allow Him to do it… and praise Him in the midst of it!